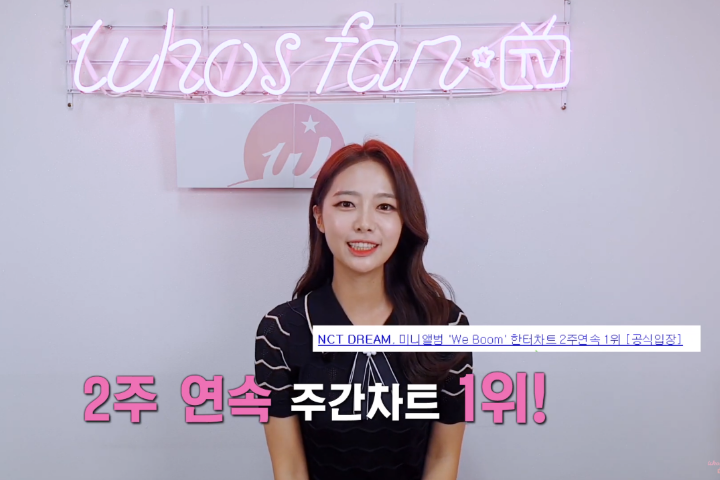 On the 20th, the YouTube channel ‘WhosfanTV’, operated by ‘Whosfan,’ a community platform for K-Pop fans all around the world, released the video of Hanteo Chart’s 3rd week of August Physical Album Chart TOP 10.

WhosfanTV’s official MC, the newscaster Jo Seo Yeon, reported that the 1st place in the 3rd week of August’s album sales was taken by NCT DREAM for 2 weeks in a row. The higher ranks of the chart were followed by ‘City Lights’ by BAEKHYUN and ‘What a life’ by EXO-SC (Sehun & Chanyeol).

The albums that will beat the heat such as ITZY’s ‘IT’z ICY’ and OH MY GIRL’s ‘FALL IN LOVE’ are also in the ranking.

More video contents related to music chart and K-Pop, including the weekly chart news, can be found on the YouTube channel, ‘WhosfanTV.’

Below is the video from WhosfanTV.

https://youtu.be/CbnxJU8oKIE On April 7th, the YouTube channel ‘WhosfanTV’, operated by ‘Whosfan,’ a community platform for K-Pop fans all around the world, released the video of Hanteo Chart’s 1st week of April Physical Album Chart TOP 10. The top of the Weekly P

[Breaking] (G)I-DLE Surpasses the Initial Chodong Sales Amount of 100,000 Copies on the 3rd Day Since Release of the 'I Trust' Album (Hanteo Chart Official) "Achieves the growth rate of 495% and breaks the group's own record... Will they aim for 200,000"